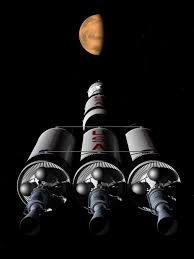 The Atlantic has a conversation with Eric Anderson of Space Adventures: The Coming Age of Space Colonization.

I remember this stuff being a big deal in the late 70’s; you couldn’t pick up a fanboy magazine without slogging through a lot of fanciful stories about how we by gosh were going to have a huge, impossibly advanced space colony within the next decade or so (Spin up the wayback machine: remember Omni and “L5 by ’95”? Admit it, already).

And in the “how to get there” category: CalTech Assigns Students to Design a Mars Mission, or at least to one of its moons.

Finally, closer to home: SpaceX Dragon Splashes Down, Completing CRS-2 Mission. This is becoming less and less newsworthy, which is a good thing.

Wired recently interviewed Elon Musk about why he founded SpaceX and his long-term goal of settling Mars:

Anderson: And Dragon, the spacecraft you berthed with the ISS in May, has features that might eventually prepare it for a manned Mars mission.

Musk: Eventually, yes. The thrusters on Dragon are sized so they’ll be able to do launch escape—which means being able to move away from the rocket at a force of approximately 6 g’s. That same thrust level happens to be kind of a good number for supersonic retro-propulsion for landing on Mars.

There’s also a lot of myth debunking and bubble-bursting contained within, particularly in regards to the conventional wisdom on rocket construction and launch economics. But wait, there’s more!

Musk: Version two of Dragon, which should be ready in three years, should be able to do it. But really, if humanity is to become multi-planetary, the fundamental breakthrough that needs to occur in rocketry is a rapidly and completely reusable rocket. In the absence of that, space transportation will remain two orders of magnitude more expensive than it should be…

…I’d like to emphasize this is an aspiration for SpaceX—I’m not saying that we will do it. But I believe it can be done. And I believe that achieving it would be on a par with what the Wright brothers did. It’s the fundamental thing that’s necessary for humanity to become a space-faring civilization. America would never have been colonized if ships weren’t reusable.

By all means read the whole thing.

Coincidentally, here’s the recent hover flight of their Falcon 1-based “Grasshopper” booster.

The SpaceX Dragon has successfully completed its first demonstration mission to the International Space Station.

Wish I had time to opine more, but for now get thee to this here link for pictures and details.

Here’s a shot of Dragon waiting for its ride home:

The significance of this mission cannot be overstated. From my layman’s perspective, it was pretty much flawless – and did I mention this was only the second flight? There’s been a lot of skepticism about the whole Commercial Crew program from politicians and others who are ordinarily pro-free market, but when seeing their NASA cash cow starved, begin to freak out and insist on throwing more money at an agency which has not demonstrated that it can successfully develop a new spacecraft in the past thirty years. END_OF_DOCUMENT_TOKEN_TO_BE_REPLACED

After a last-half-second abort on Saturday, they fixed their little problem and lit the candle early this morning. Their launch window to ISS was instantaneous, so this is quite a big deal that they could pull it off on just the second try. It also speaks well of Falcon 9’s reliability (and repair ability).

They have a lot of on-orbit tests to do before NASA will let it anywhere near the space station, but this is a very good start.

The Atlantic recently posted a couple of really nice photo essays on the space program. The piece on decommissioning the space shuttles isn’t too surprising; that’s a big and fairly recent deal. The Gemini story is more surprising, as it happened nearly 50 years ago and is generally only thought about by space geeks like me.

Gemini was the gateway drug that hooked me on the space program, maybe because they were the first missions I was conscious of. I remember being fascinated by the big silver rocket with the little two-man tin can on top. And spacemen were cool. How could I not be drawn to something that looked just like my favorite G.I. Joe? END_OF_DOCUMENT_TOKEN_TO_BE_REPLACED