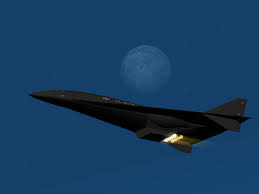 Stories of Aurora sightings have been around the web almost since before there was a web. Most of them have been relegated to the category of Bigfoot hunters or UFO stalkers outside Groom Lake (Area 51 to those of you who only know about it through Discovery Channel).

But when an editor of Flying magazine posts a story about another “donuts on a rope” contrail sighting, it tends to get my attention. But I think he’s wrong, and have to wonder if it wasn’t put out there as troll bait. It probably would’ve made a better April 1st story, if youknowhutImean.

There are several reasons why I think this is bogus, not the least of which is the trans-Pac airline pilot in comments who states he sees contrails like that all the time. Of course, he might be an intentional red herring from the government, engaged in a false flag operation to throw cold water on the whole story (cue “X Files” music).

But the main reason is this: based on my workmanlike aeronautical knowledge, there is simply not enough atmosphere at the altitudes he’s speculating about to form contrails. And a Flying editor should probably know that. Contrails form whenever there’s enough moisture in the upper atmosphere to condense in the jet exhaust – ever notice that on really bright, clear days there may not be any trails up there at all? So how much moisture do you suppose is hanging around at 200,000 feet?

My guess is none.

Of course, if we’re talking about a hypersonic waverider fueled by hydrogen slush, liquid oxygen, and unicorn farts, then it’s essentially carrying its own atmosphere. Maybe it’s possible for such a vehicle to contrail at any altitude. But that close to vacuum? I dunno.

Depending on who you listen to, Aviation Week either uncovered the black project to end them all or fell for a ruse no doubt concocted as another false flag to hide something even more important. Personally, I’m hoping AvLeak got it right about Blackstar but smarter people than I shot that theory full of holes a long time ago.

Unlike Bigfoot or UFOs, there are reasons I keep an open mind about stuff like this. That being, we have done all kinds of really cool things in the past which weren’t made public for several years. The U-2, SR-71, and F-117 immediately come to mind. And Boeing was flying this little beauty for a long time before it was finally made public. I’ll be getting eyeballs on it in person tomorrow at the USAF Museum:

Back in Gulf War I, a pilot in our squadron swore he saw what he thought was Aurora. He said it was shaped almost like a guitar pick and climbing like a bat out of hell above southern Iraq. He couldn’t get a radar return but based on eyeballs he guessed it was climbing well above Mach 3.

Was he just yanking my chain? Probably, but I like to think not.