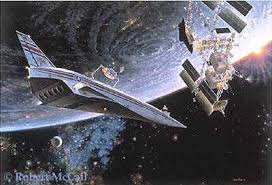 From the USA Today of space news, space.com, a nicely illustrated story on the (non) evolution of space plane designs. I say “non” because precious dadgum few of them have ever made it to the cutting-metal stage.

Come to think of it, we’re going to need a new expression, being in the age of composites. But “baking plastic” just doesn’t have the same cachet, does it?

Notice that all those proposed spaceplane-to-orbit ideas feature an itty-bitty plane on top of some really big-@$$ boosters, and that most of those boosters are just fuel tanks. So yeah, I might have just undercut my own suspension-of-disbelief case for Perigee but we are talking about fiction, after all. And there is plenty of precedent for the idea – it’s not like I came up with it all by myself. So there.

If you want an idea of how much energy it takes to reach orbit, first look at that Saturn V diagram. For a rocket that was almost 400’ tall, the first two-thirds of it was there just to get the remaining third into orbit at 17,000 mph. The final third was there to launch the command/lunar module stack towards the Moon at 24,000 mph (driving home Heinlein’s point that once you’re in orbit, you’re “halfway to anywhere”).

Good question. First, that 240K is a straight-line distance and spaceships don’t travel in straight lines. Apollo followed a Hohmann transfer orbit, essentially a long curved path from Earth that ended at a tangent to the Moon’s orbit.

Also keep in mind that 24,000 mph escape velocity is just enough to get out of Earth’s gravity well, which was constantly pulling at Apollo and slowing it down until it was finally overcome by the Moon’s gravity. At its slowest point, I think Apollo slowed down to maybe 3,000 mph.