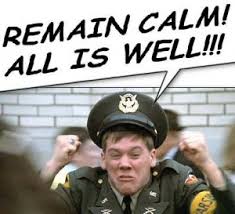 Okay, I can’t not post something about the Obamacare ruling. This is stunning, not to put too fine a point on it. I had tried very hard not to get my hopes up too much, because it just doesn’t do any good to try and make predictions about such an opaque institution. The Justices frequently take positions that are 180 degrees from what we might expect. And a lot of people figured Roberts would vote to uphold only if he saw the verdict going that way regardless, in order to be able to write the majority opinion. This would’ve allowed him to set the boundaries of this law and hopefully limit the damage.

No joy – he ended up being the swing vote. I mean, really? Whiskey Tango Foxtrot, over?

My old man was a judge, so that plus watching Law & Order is the extent of my legal education. I suppose they have the authority to say the individual mandate can be considered a tax, though I think that’s a load of crap: if the government’s attorneys weren’t willing to make that argument, how can the Justices infer it on their behalf?

If there is any solace to be found in this, it’s that the mandate was rejected under the Commerce Clause. That is, the Congress can’t force us to buy something just because they think it’s good for us (unless they call it a tax, I guess).

Justice Roberts did qualify his opinion: “Because the Constitution permits such a tax, it is not our role to forbid it, or to pass upon its wisdom or fairness.” And Rand Simberg posted this money quote from Roberts on his blog: “It is not our job to protect the people from the consequences of their political choices.”

Dadgum straight, that. Frakkin’ A, bubba. So we lick our wounds, pick ourselves up, and get on with the serious business of returning this country to some form of a Constitutional, representative Republic.

What’s never mentioned enough in all the jackassery that surrounds the health care issue is that the Left insists on imposing a 100% solution to a 10% problem.

I’m all for helping out people who are in real trouble, but that’s never been what this is really all about. Just because something sounds like a nice thing to do doesn’t make it constitutional.

I pray we are not yet completely at the mercy of the low-information voters, because there’s no shortage of political animals who view health care as something else entirely – that is, an opportunity to exert control.

We are increasingly ruled by tyrants. Plan and vote accordingly.